One shoe does not fit all in anything, including martial arts. Cookie cutter programs DO NOT work!

We offer age specific curricula for everyone unlike anything available elsewhere. Each program is specifically developed to meet the needs of that group. Our Life Skills & Martial Arts Program is geared for kids ages 5 and above who have already started Kindergarten through middle school age. Our Practical Self-Defense Program is open to adults of all ages and fitness levels. Gendai Goshin Jitsu focuses primarily on teaching realistic self-defense skills. We also hold training for Law Enforcement personnel plus periodic Workshops as well as customized courses tailored to the needs of organizations, companies, and civic groups.

Some say we teach “Dirty Ju Jitsu.” You are darn right we do!

WE TEACH YOU TO…

WHY? BECAUSE IT WORKS, IS SIMPLE, AND ANYONE CAN DO IT!

Your personal health and safety is our concern and NOT teaching formal martial arts or sport related martial arts!!! We are not your typical school and as such are not caught up in teaching an art for its traditional or sport benefits.

We are sincerely concerned about your well being, fitness and personal safety!

You will not find another school like ours anywhere in this area. We provide 100% real-world self-defense training, focused on the ability to defend yourself under realistic conditions – not scripted classroom scenarios!

WE INVITE YOU TO JOIN US IF YOU…

◉ are looking to learn REALISTIC self-defense that actually works
◉ are looking to give your child a leg up in life
◉ would like your son or daughter learn to deal with their age specific challenges: peer pressure, bullying (in a manner that actually works*), internet safety, abduction, gun safety & much more)
◉ want to learn the art of karate or karate principles & techniques that actually work in the streets?
◉ want to learn the art of Ju Jitsu (Jiu Jitsu) for practical application.
◉ are healing from trauma associated with surviving sexual assault, rape, domestic violence
◉ are concerned about a school’s ability to understand and truly help
◉ are looking for increased self-empowerment
◉ are dealing with Post Traumatic Stress Disorder (PTSD)
◉ looking for an exciting and fun way to get in shape… but, with added benefits for you or your child

PLUS, it’s fun and a great workout to boot! 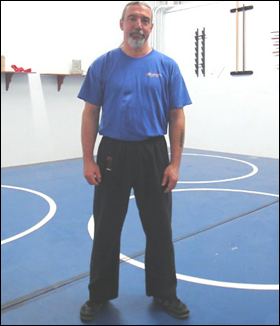 He has a B.S. Degree in Chemistry from East Carolina and has also worked professionally as a Chromatographer.